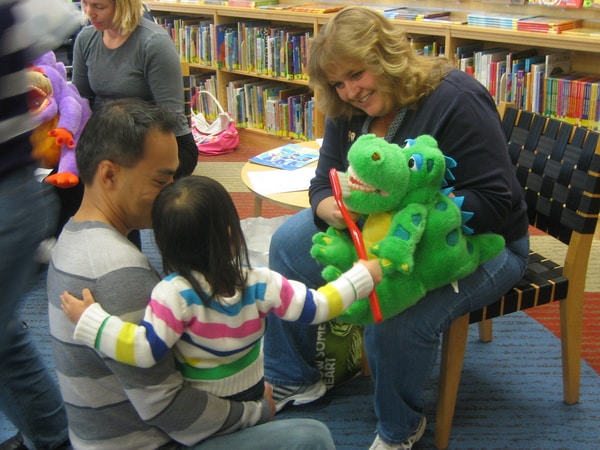 The first day that I used a puppet with my kids, I felt foolish bringing Mr. Monkey into the classroom. I guess there’s just something about being an adult, who at that time hadn’t had much experience with children, and playing with a stuffed animal. However, when I got up the courage to don the puppet on my hand and introduce him to the class, I was amazed at the response I got. The kids shouted with excitement and glee. Every joke that Mr. Monkey made was met with raucous laughter–I had their complete attention.

Read on for 10 ways that puppets can be used in your young learner TEFL classroom. Or, if you’d rather get a few non-puppet games to play with your students, you can gain access to the resource by clicking on the button below.

In almost every class, there’s a child who is a little younger than the other students or perhaps just naturally shy. While most children enjoy talking to the teacher, some are scared of a 95kg man towering over them and asking questions in a language that they don’t really understand. This is where puppets come in.

Sometimes, shy students are more apt to talk to your fun puppet than you. You can even go as far as to have them whisper answers in the puppet’s ear. I’ve had great success getting students to open up this way.

If you want to model a conversation, there are a few options. You could model the question and answer with a teaching assistant or you could use a strong student in the class to model it. However, you might not always have a teaching assistant, and you might find that the stronger students in your class aren’t always willing to perform in front of their peers. This is where puppets come in.

With a puppet on your hand, suddenly you have someone who you can talk to and who can respond. Yes, I do recommend that you practice a funny voice BEFORE trying it in class. Simply vary your pitch or tempo, it’s easier than you think. Own that alter ego!

Are you telling stories and want to add some visual aids? This is where puppets come in. You can either have the puppet tell the story or simply use it to do actions. If it’s a story about an elephant, and you have access to an elephant puppet, use it. Making the story more engaging will keep the students’ attention focused on you.

Same as above. One sure-fire way to get the kids more involved in a song about an animal is to use an animal puppet. For example: 5 Little Monkeys or Can an Elephant Jump?

Do you ever find that your young students aren’t always focused when you are trying to review some language? That, or that you simply want to create opportunities to have the students, even with a very low-level, say a few easy things in English? This is another moment where puppets, yes puppets, can step in.

Are you reviewing colors? Ask about the colors of different puppets. Animals? Simply ask what animal it is. Prepositions? Have the students close their eyes and hide the puppet around the room. Present continuous? Have the puppet do different actions and get the students to choral the answer. You get the idea.

This is a little trick that one of my coworkers uses a lot in his preschool class. These students are too young for teams; they don’t really get it or don’t really care. However, they are very motivated by stars. You, as the teacher, could give them or take them away, or…puppets could step in.

His idea was to create one “good” puppet named Jeff who would award stars to the whole class. Every time Jeff would put a star on the board the children would clap. There is also an “evil” puppet named Ben who takes away stars if the children are being naughty. I covered his class once and copied his usual routine, the students were absolutely terrified of Ben and visibly adored Jeff.

For slightly older kids (5-7), they might not really care about puppets as enforcers of class rules. They do however, still like when puppets step in as team mascots. When you divide groups into teams, assign one puppet per group.

There are loads of games where puppets can step in; let me tell you a few. “Flying Mr. Monkey” is simply a game where students throw the monkey instead of a ball. You can even say that Mr. Monkey is very old, so they need to throw him carefully. “Feed the Elephant” is a great game for food vocabulary, the students feed the puppet by giving it either a picture they drew or a flashcard, the puppet can either eat it and say that it likes the food or spit it out. “Hide Ms. Rabbit” is a game where students hide the rabbit while the other team isn’t looking, the other team has a limited amount of time try to find it.

9. As Props for Students

In the same way that a puppet can step in for a TA, it can also step in as a conversational tool for students. Very young learners aren’t as shy to perform a short skit if they have a puppet on their hand. It also helps with creativity; what would a rabbit have to say to a monkey? I guess they could talk about food…

10. To Increase the General Excitement of the Students

The point is, that using puppets is just another weapon in a teacher’s arsenal to use in the fight against young learner’s short attention spans. It feels a bit strange at first, but only to you the teacher. I’m always amazed at how willing young children are to involve themselves in fantasy.

As an adult, if you put a dragon puppet on your hand it is just a dirty piece of colored fabric, to children, who still have overactive imaginations, the dragon become alive. It can fly and breathe fire! When I say that students have to be quiet because baby monkey is sleeping, guess what, they are quiet.

If you haven’t already, I highly recommend giving puppets a try in your classroom. If you’d like some other ideas for games to use with young learners, you can gain access to the free resource by clicking on the button below.