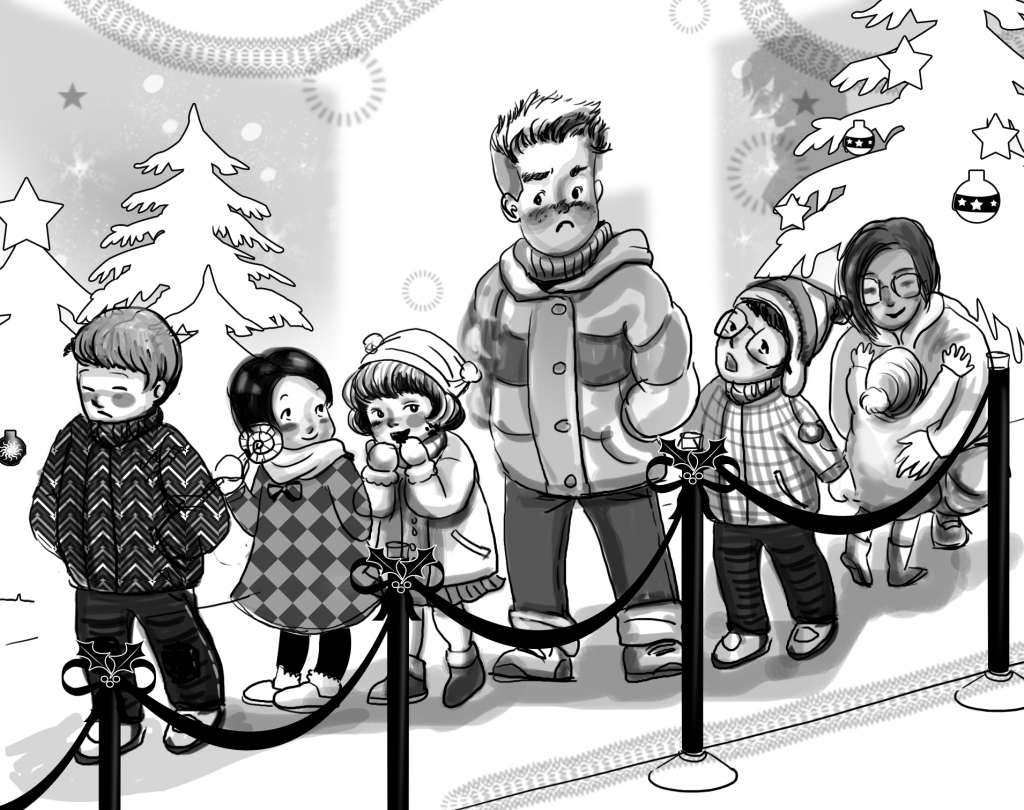 Merry Christmas! To celebrate, TEFL Express is giving you another graded reader. The installments will be published every Wednesday with the finale coming your way on December 23rd. Each part will come with a resource pack that can be used to help you use the story in your classroom. You can download it by clicking on the button below.

If you missed part one, check it out by clicking on the link below.

Read on for Christmas Bully (part 2)

James was still shaking when he came upstairs from the basement. Had he really just seen a monster? He couldn’t stop thinking about the hairy creature named Krampus with its sharp claws and hairy body.

Instead, when school was finished, James rode straight home on his Ace 3500 bicycle. The Ace 3500 was the most expensive bicycle at the store. His mother bought it for him for his birthday a few months ago. She buys him anything he wants, but James always wants more.

“Oh hello James!” his mother, Mrs. Whitley, said when he opened up the door, “You don’t usually come home this early. Is everything okay?”

Mrs. Whitley had to bring his dinner upstairs to him. James was so upset about Krampus that he didn’t want to leave his room. “Is everything okay James? Can I get anything else for my special boy? Tomorrow is Saturday after all,” Mrs. Whitley asked.

“No mom. I’m going to go to bed early,” James said leaving his dirty dishes of food for his mother to clear.

James did go to bed early. When he woke up the next day, he felt a little better. Maybe there really was no monster named Krampus. Maybe he had imagined the whole thing.

“I have to make up for yesterday. Today I’m going to hit all of those kids with two snowballs,” he thought to himself smiling.

James ate breakfast while watching TV. Poor Mrs. Whitley didn’t have time to enjoy her breakfast. She needed to do the dishes and do some laundry before she went to work. She had to work, even on Saturdays.

Mrs. Whitley was a single mother. James’ father had left them alone a long time ago when James was very young. Mrs. Whitley had a difficult life.

James went outside to get his bicycle, but it wasn’t there. He asked his mother where it was, but she didn’t know. “Did you leave it at school?” she asked.

It was Krampus! Of course, Krampus took James’ bike! If the curse was real, then Krampus was real. James started to shake again and he wanted to cry. What was he going to do?

James sat down in the snow. His pants got a little wet, but he didn’t care. He was very worried. What was Krampus going to take next? Also, didn’t Krampus say he would come and take James away when Christmas came? Didn’t he say that he would make soup out of James?

However, Santa Claus is supposed to live in the North Pole. That was very far away from James and even colder than Wisconsin. Where else would James be able to find Santa? “The mall! Santa Claus is always at the mall during Christmas!” James suddenly remembered.

Full of hope and excitement, James started walking down the street towards Regency mall. It was a few kilometers away, so James stole the first bicycle that he found parked by somebody’s house. Stealing bicycles didnâ’t make James feel bad at all. The bike was a little small, perhaps a young child’s bike, but it worked.

James was right, Santa was in the mall. As soon as he entered the main doors he could see Santa sitting on a chair atop a stage. There was a very long line of children waiting to see Santa.

The mall is always busy at the weekend, but as it was only a week away from Christmas, the mall was chaotic. People were pushing each other in shops. Everything was on sale. Everyone looked stressed. Everyone except the kids in line to see Santa.

Parents weren’t allowed in line. They all stood to the sides and watched their children. Almost all of the kids in line were a few years younger than James. Some of them were only six years old. James felt very strange being the oldest one in line.

Even some of the parents looked at James and laughed. He heard one of them even ask, “Do you think he still believes in Santa Claus? Thatâ’s so cute.”

After waiting for thirty minutes, the line was still very long. Parents were watching, so James couldn’t skip ahead in line. James had a clever plan to get in the front of the line.

James leaned down and whispered to the child in front of him, “There is no Santa, he isn’t real. That is just a man in a suit.”

The child immediately started to cry and left the line. James’ plan worked perfectly. He whispered the same thing to every child that was in front of him. James soon found himself in the front of the line. Santa didn’t seem very happy.

“What did you just do?” Santa asked, “Why are all of those children crying?”

That was odd, this man didn’t sound like Santa. Also, the beard looked very fake. The man wasn’t even fat. James could see some of the stuffing come out of Santa’s suit. “Are you the real Santa?” James asked.

“What do you think?”

The man dressed as Santa began to clap his hands. “Oh, very good. You are very clever. Aren’t you a little old to believe in Santa Claus? What do you want?”

Behind Santa was a little snow house made of cardboard. It was decorated with lights and there was a big sign that said “Santa’s House”. Suddenly, in one of the windows, James saw the face of Krampus appear. Krampus was laughing.

James pointed towards the house, but the man dressed as Santa didn’t seem to see Krampus. “What is wrong with you kid?”Santa asked.

James was starting to cry a little. “I’m trying to stop someone from doing something very bad to me. I don’t know how to stop him. He’s bigger than me and he’s very mean.”

“Well kid, I’ll tell you this. If you start being nicer to other people, they’ll be nicer to you. Maybe if you weren’t bullying little kids, you wouldn’t be bullied by someone bigger than you. Just be nice kid and things will work out fine. Now get out of here,” Santa said calling the next kid up to the stage.