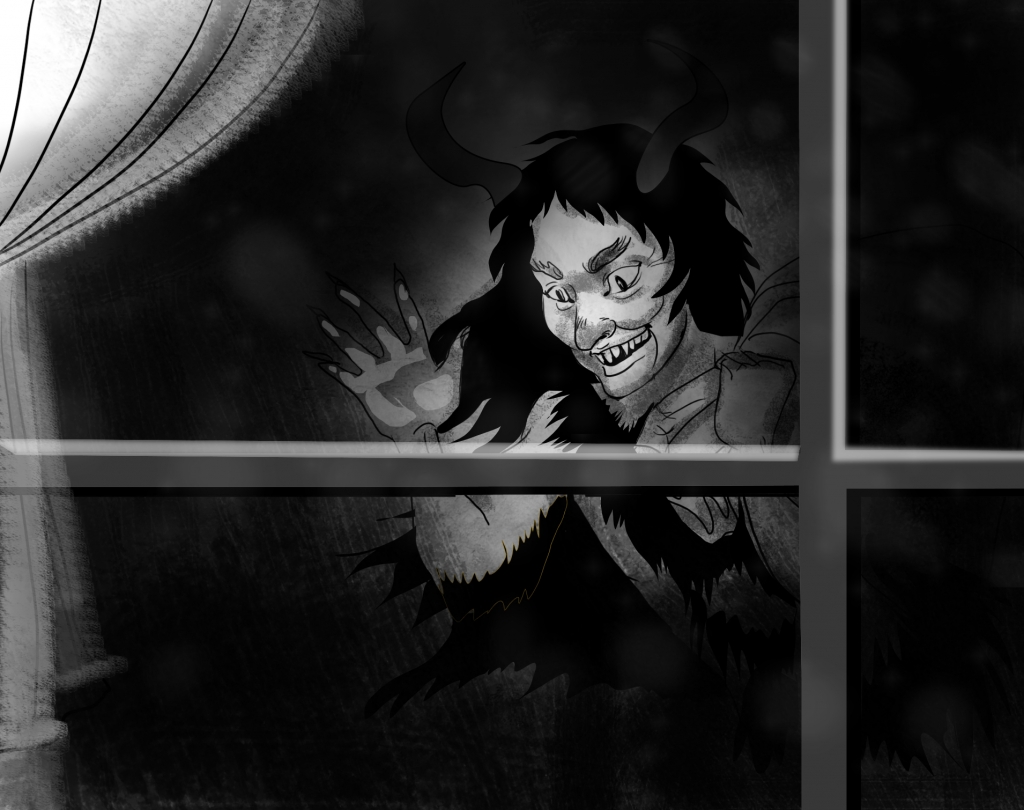 Welcome to the final installment of “Christmas Bully”. This is a serial story intended for pre-intermediate students. This is end of the story, so if you missed the first two parts, you might want to start by clicking on the links below:

Each story includes a resource pack with to help with difficult vocabulary. You can download the resource pack for part three by clicking on the button below.

Read on for the dramatic conclusion of “Christmas Bully”.

The next morning James woke up and the television in his room had vanished. Any doubt that Krampus was real also vanished as James walked over to the empty shelf where the TV used to be. A short note was written in the dust on the empty shelf. â€œSeven more days,â€ it read.

James was more scared than he’d ever been before. Krampus was going to come for him on Christmas day and make him into soup. James didn’t want to become soup. “What can I do to stop him?” he wondered.

What was it that the Santa Claus at the mall had told him? “Just be nice”. Maybe if James was nice to kids, maybe if he fixed the bad things he had done in the past, Krampus would leave him alone.
“If I’m nice to other kids, maybe Krampus will be nice to me…” James thought to himself.

It was Sunday morning, so James went downstairs and had some cereal and orange juice. He started to plan ways he could be a good kid. What bad things had he done recently? Obviously, the first thing he needed to do was to give Tim a portable game console.

What else? Well, one week ago, James borrowed a bicycle from Alex. He wasn’t going to steal it, he just wanted to do some stunts on it. It wasn’t really his fault that the bicycle was broken, but Alex probably didn’t agree. Maybe he could help Alex fix the bicycle.

“I guess I could be nicer to Billy Thornhope, that big loser,” James thought.

That should do it. If James was nice to those three kids, then Krampus would probably leave him alone. His first stop was to go to Tim’s house.

Tim lived about four blocks away, so even without his bicycle, James could get there easily. When Tim opened the door he was terrified. He looked like he was going to scream when James started talking. “I’m here to say that I’m sorry” James said.

“Sorry?” Tim looked like he couldn’t believe what was happening.

“Yes, I’m sorry. I’d also like you to have this. I know it isn’t exactly the same as the one I took from you, but that one is gone. I’m very sorry.”

James took out a portable game console from his bag. It wasn’t the same brand as the one that he took from Tim two days ago, but it was just as good. It was difficult for James to give Tim the console, but James decided if he didn’t do it, Krampus would probably take it anyway.

Tim still looked nervous, like at any moment James would start to hit him. “Well, that’s it. Merry Christmas Tim. Sorry about yesterday” James said and turned around to leave.

Next stop was to find Alex. James knew exactly where Alex would be. When he wasn’t at school Alex was always at the park riding his bicycle or ice-skating. When James got to the park, sure enough, Alex was ice-skating on the small pond.

James waved at him. Alex immediately skated as far as he could from James like he was running to save his life. After that, he took off his skates and continued to run away. James thought he heard him yelling “help!”

Alex’s bicycle was leaning against a tree by the pond. James walked over to it. It was still broken. The front wheel was bent. “I guess I could fix the bicycle and put it back where I found it. That would be nice, wouldn’t it?” James thought.

There was only one bike shop in town so James had to borrow the bicycle one more time. He rode a few kilometers to the shop and the man fixed the tire in only fifteen minutes. It was very cheap as well. If James knew how easy fixing the bike would be, he would have done it earlier. Well… maybe not.

James returned the bicycle to the same tree where he had found it. He wrote a short note and tied it to the bicycle handle. “Sorry for ruining your bicycle last week. I fixed it and it rides very well now. Merry Christmas,” the note read.

James felt better already. Surely Krampus wouldn’t come after such a nice boy who gave away his video games and fixed people’s bicycles. Either way, just to be safe, James decided to visit Billy Thornhope. What could he do to Billy to make him feel like less of a loser? This was going to be difficult.

James had never seen Billy’s house before. Still, he knew which direction Billy usually ran away  after James said something nasty. James walked in that direction and looked at the names on the mailboxes. After walking a long time, James found an old woman walking down the street. “Excuse me maam, do you know where the Thornhope house is?” James asked.

“Yeah. It’s that piece of junk over there,” she was a very grumpy old lady.

It really was an ugly house. It looked abandoned, not like a place where people lived. There was a hole in the rooftop and almost all of the windows had boards over them. “It must be very cold inside of that house” James thought.

When James knocked on the door, an ugly man answered. The man smelled like cigarettes and whisky. He looked like he hadn’t taken a shower in a week. “Excuse me, is Billy here?”

The man grunted and shouted Billy’s name loudly. Then he left James alone to wait at the door. Eventually Billy came downstairs. He was wearing a thick jacket and his face was red from the cold. “What do you want?” Billy asked.

It was strange, but Billy seemed more curious than frightened. “I’m here to say that I’m sorry,” James said.

“Sorry for what?” Billy asked.

“I’m sorry for calling you names and pushing you in the snow,” James apologized.

Billy didn’t say anything at first. Billy stood there looking James in the eye before finally he said, “Ok. Is that all?”

“Ummm, and I’d like to invite you over to my house tomorrow to play,” James said.

Now Billy looked really confused. “Is this a trick? Don’t come to my house. My dad can get very angry when he wants to. He’s even scarier than you. Now go!” Billy said.

“No trick Billy, will you please come over to my house tomorrow? Seriously, I promise it will be fun,” James said.

When Billy came to the house the next day he was still nervous. He didn’t trust James and had no reason to. Usually James was the kid who pushed him into the snow and called him a loser. Why would he be nice now?

“Your house is very beautiful,” Billy said as soon as he walked in.

Billy was surprised that it was warm enough that he didn’t need a jacket. “Thanks. So, I’ve got an idea what we can do together. Do you like models?” James asked.

“It’s the ‘Millenium Falcon’ from Star Wars. It’s the coolest thing I own. Why don’t we make it together. It will be like it’s both of ours,” James said.

Billy’s face began to glow with happiness. How could this possibly be true? Billy loved Star Wars, but his family was very poor. They would never buy him anything like the ‘Millenium Falcon’. “Let’s do it!” Billy said forgetting that he was nervous.

James wasn’t building the model with Billy because he was being nice. When James woke up before school, his favorite movie posters had disappeared! James thought that maybe if he worked on the model with Billy that Krampus wouldn’t take it. After all, Billy is a nice boy. Krampus can’t steal from nice boys, can he?

The two boys had hours of fun beginning the project. While they built the model, they talked about all of their favorite Star Wars moments. Both of them hated I, II and III but they still watched them many times. Neither James nor Billy had had this much fun in months. Neither of them really had any friends.

Billy came over every night that week leading up to Christmas eve. The two boys had started to watch the Star Wars films while they built the model. They were almost done watching all of them by the time they finished the model.

When the model was finally finished, the two boys stared at it for about an hour. They tried to guess what each section of the ship was for. Suddenly, Billy started to cry. “What’s wrong Billy?” James asked.

“I’m just really sad that it’s finished. I really liked building it with you,” Billy said.

“I really liked building it with you. You know what, you can keep it,” James said surprised at his own act of kindness.

“Yeah, I’m pretty sure my mom is getting me some other models for Christmas anyway. I want you to have it,” James said smiling.

It was strange, but it made him really happy to give the model to Billy. It made his heart feel warm. It was a feeling James hadn’t felt since he was a very young child. The two boys started to laugh and went downstairs to have some hot chocolate.

The boys didn’t know that the whole time they were building the model, Krampus had been watching them from the window. He was planning on taking James away that night, but now… now he couldn’t. Krampus left the house hungry looking for a different nasty boy to curse.