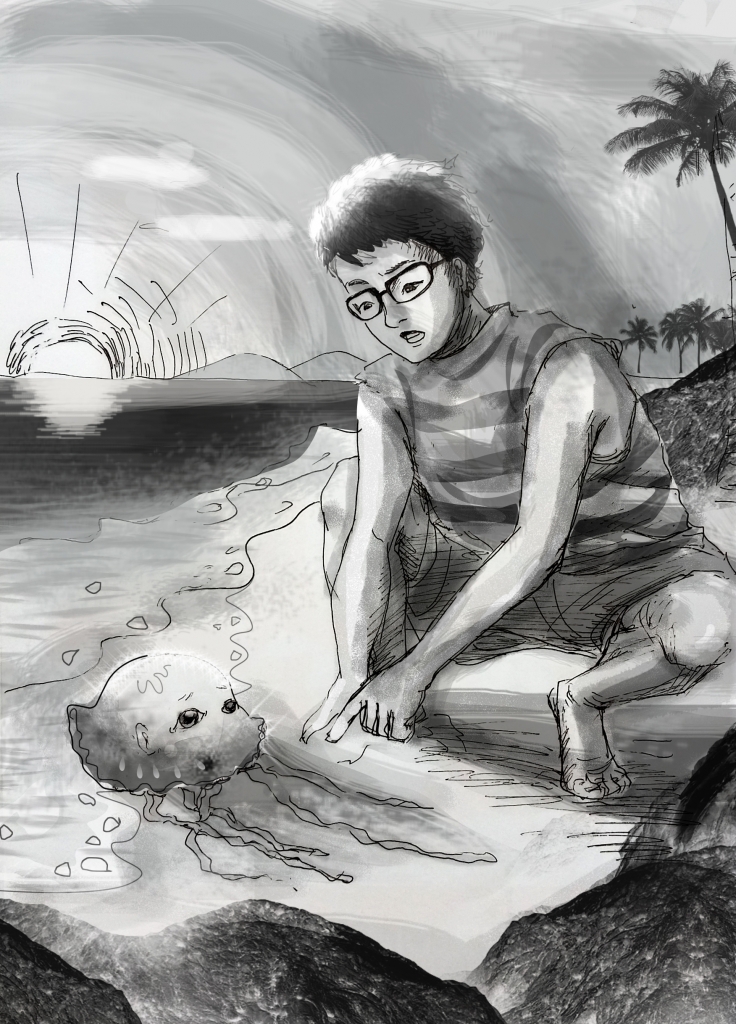 If, like me, you were trying to come up with something fun to do with your high elementary or pre-intermediate teens for Halloween, look no further. I’ve brewed a fun Halloween story and spiced it up with loads of activities and lesson materials for you to use in class. And if this is not your thing, I bet the online casino games at daisyslots are what you’re looking for.

TEFL Express is proud to present our very first serial graded reader, “Discovery at Vui So Beach”. This story is divided into four acts that will be posted every Friday. The final installment will be ready on Friday, October 30th, just before Halloween.

At the end of each installment, you will see a button asking if you want to download the lesson pack that accompanies the story. Each of these packs includes: a vocabulary list, a vocabulary exercise, comprehension questions, grammar links to the story and class extension ideas. Using one installment of the story in class could take anywhere from twenty minutes to one hour, depending on how much of the lesson pack you use. Read on for the first installment.

Act I: The Jellyfish Man

June walks through the crowd of students. He is walking towards the bbq holding a plastic plate. He really wants some more chicken, but he really doesn’t want to talk to anyone on the way. He is halfway to the bbq and can smell the chicken on the grill when suddenly he is stopped by Cici Nelson.

“Hello June. Want to join the game? We need one more person for our team,” Cici says putting her hand over her eyes to shield the sun.

Cici is another student at Bamboo International School. She is fourteen, two years younger than June, but she is in his class. Cici is very smart. Also, June’s English is not very good so the teachers at Bamboo decided he should study at a lower level and focus on his English skills.

“Oh…ok. Well, if you change your mind you can join anytime,” Cici smiles and runs back to the volleyball net.

June is sweating. It is partly because of the heat and partly because of Cici. He always feels nervous when he talks to her. It is strange because she is very kind to him. He wipes the sweat from his foreheadÂ  and continues walking towards the chicken.

The whole school is at the beach party. Some of the students are swimming in the ocean and playing group games. Some of the younger students are building a sandcastle. Others are playing football on the sand. Many are just relaxing and chatting near the food.

Suddenly, from out of the ocean comes an ugly, wet monster– Todd Bricks. Todd bumps June as he passes him leaving a wet mark on June’s t-shirt. Todd takes the last piece of chicken from the plate and takes a large bite. “Mmmm…still hot. Hey, what’s your name kid?” Todd asks June while chewing the chicken.

Kid?!  June is the same age as Todd and they study math together. There are only four students in their Math class. This is not the first time June has told Todd his name. “I’m sorry. My name is June,” he says and gives a slight bow, trying to be polite.

“June? Isn’t that a girl’s name?” Todd laughs and small chunks of chicken come out of his mouth.

“Still sounds like a girl’s name to me,” Todd puts the chicken down on the table and runs back into the ocean.

Todd only had a few bites of the chicken. There is still a lot of delicious meat left. June sighs and takes a hamburger instead. June doesn’t really like hamburgers.

It is very loud near the food and June doesn’t want to talk to anyone. June wants to be alone. June begins to walk away from the group. He walks near the water so that his feet splash in the ocean while he walks.

June is Korean, but he goes to school in Hoi An, Vietnam. It’s a small tourist town with lots of temples and beaches. He lives here with his sister and his mother. His father is still in Korea working for a big company. His family moved here without his father six months ago. He doesn’t know why, but he thinks it is because of him. He wasn’t very happy in his school in Korea. There were many bullies. It is nicer at Bamboo school. There is only one bully: Todd. Todd isn’t very smart and he is easy to avoid. Everyone is easy to avoid in Hoi An.

June walks for about an hour, taking small bites of the hamburger as he walks. The sun is setting and it is beginning to get dark. He looks behind him and can see that the students and teachers are making a bonfire. June doesn’t like bonfires.

June walks very far away from the group. He is on a part of Vui So Beach that he doesn’t know. It is very rocky and there is a lot of seaweed and other debris on the beach. June takes a small flashlight out of his pocket and shines it at the ground.

A few years ago, when June was on a beach vacation with his family, he found an old watch on the beach. His father told him it was worth a lot of money. June still has this watch. It doesn’t work, but June thinks that it is lucky.

Maybe June will find a new treasure here today? June walks around the debris and flashes his light on it. He kicks the seaweed to see if there is anything interesting under it. There isn’t.

June has seen many Jellyfish before in Hoi An. They often are washed onto the beach. Sometimes they are quite big. They look like large frisbees or hats, but much too soft to throw or wear.

June knows that jellyfish can be dangerous. If a jellyfish’s long legs touch you, they can burn your skin and leave a red mark. June once heard a story about a man who was swimming in the ocean and he swam into a large group of jellyfish. There were so many jellyfish touching him that he died. This is one of many reasons that June doesn’t like to swim in the ocean. It is very dangerous.

The jellyfish has dark brown eyes. Sometimes, the eyes blink. Sometimes they stay open for a long time. The strange eyes of the jellyfish are looking at June. He doesn’t know why, but the eyes look sad.

“Are you okay?” June asks the strange looking jellyfish.

The jellyfish is silent, but it blinks three times. Maybe this means ‘yes’? “If you stay here you will die. Do you want to come home with me?” June asks.

Again, the jellyfish doesn’t say anything, but again the jellyfish’s eyes blink three times. June thinks about this for a few minutes. He can’t just leave this jellyfish on the beach. It is very special. It has human eyes!

June cleans off the plastic plate in the ocean. He puts some water on it. June takes off his shirt and puts it in the ocean so it is very wet. Very carefully, June pushes the jellyfish onto the plate and wraps it in his wet t-shirt.