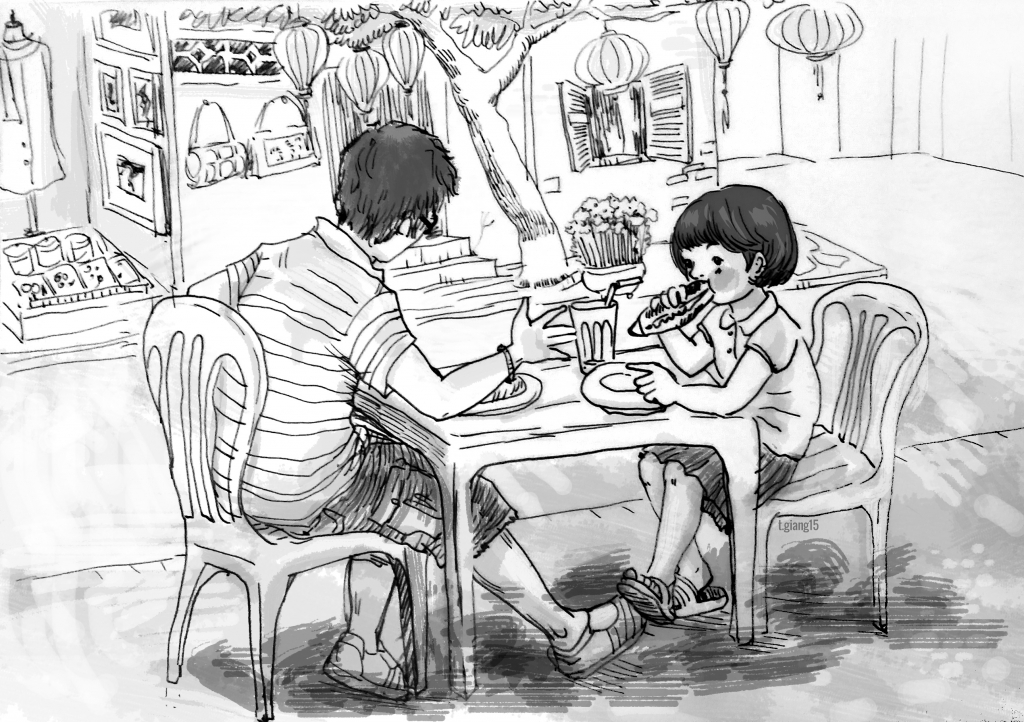 Welcome to the second installment of TEFL Express’ first serial graded reader, “Discovery at Vui So Beach”. This story is divided into four sections that will be posted every Friday. The final installment will be ready on Friday, October 30th, just before Halloween.

If you missed Act I, you can find it here.

At the end of each installment, you will see a button asking if you want to download the lesson pack that accompanies the story. Each of these packs includes: a vocabulary list, a vocabulary exercise, comprehension questions, grammar links to the story and class extension ideas. Using one installment of the story in class could take anywhere from twenty minutes to one hour, depending on how much of the lesson pack you use. Read on for the first installment.

June is sitting on his bed looking at the jellyfish man in its aquarium. He has been sitting here for two hours staring at it. Maybe he should give it a name. What kind of name should he give a jellyfish?

“How about Bob?” he asks the jellyfish.

“What, you don’t like Bob? How about Peter?” the jellyfish doesn’t blink.

June tries to think of popular names. “Aha! What about Taiji ? Maybe you like rap music?”

June starts to play some music from Seo Taiji and the Boyz a popular k-pop music group. As soon as the music starts, the jellyfish man begins to move around in the aquarium. It looks like it is dancing. It blinks.

“Ok. I will call you Taiji.” Suddenly, there is a loud knock on the door. “June, what are you doing in there. We have to go to school. You told me we could go together,” it is June’s sister Nari.

Nari is only nine years old. She is very annoying. She always wants to do things with June, but she is very childish. He doesn’t understand why she does things.

“Nothing. I feel sick. I’m not going to school today,” June says.

Nari tries to open the door but it is locked. “You can’t miss school again! I’m going to tell mom.”

Nari continues to try and open the door. She even hits the door with her fists. After a few minutes she stops. Hopefully she is going to school. Then, June hears another sound. It sounds more like scratching. What is she doing?

Suddenly, the door opens and Nari comes inside. “How did you do that?” June asks.

Then June sees a plastic card in her hand. She picked the lock with the plastic card. She is very good at this. “Nari, this is my room. You can’t just…” June starts to say but it is too late, she has seen Taiji, the jellyfish man.

Nari has very short hair. She pulls on it and begins to scream. June puts his hand over her mouth. “Be quiet, you are making Taiji upset.”

“Taiji? Who is Taiji? What is that thing in the aquarium? How did it get here? Why didn’t you tell me about it? What is happening?” Nari is asking the questions so quickly that June doesn’t have time to answer.

“Come on, let’s get some breakfast. I’ll tell you everything and then we can go to school, okay?” June says leading Nari out of the room.

June’s bicycle has a small seat on the back so that his sister can ride with him. She is small and it is easy to cycle with her on the back. Every year it is getting more difficult though.

June and Nari stop in Hoi An’s “ancient town” for some breakfast. The ancient town has many old buildings and it is where many of the tourists go. It also has many good restaurants. June cycles to his favorite sandwich cart.

June is very hungry because he didn’t eat very much yesterday at the BBQ. He orders a big sandwich and a mango milkshake. His sister orders the same thing. She is always copying him. She is always following him.

“Mwaw mwaw uh mwaw…” Nari is trying to ask a question but her mouth is full of sandwich.

“Please don’t talk with your mouth full Nari. It isn’t polite and I don’t understand what you are asking.

Nari swallows and asks the question again. “Why does it have eyes and ears? It looks like a person.”

“Why does it blink? Do you think it understands you?”

“I don’t know!” June is getting angry, because she keeps asking questions that he doesn’t have the answers to.

“Do you think there are more of them?” Nari asks, she looks sad.

“We have to help them,” Nari says and takes the last sip of her milkshake.

Nari is right. They should help the jellyfish men. They can’t miss school or their mother will get angry at them. They decide that they will go to the beach after school and look for more jellyfish men. “Should we tell mom?” Nari asks.

“Not yet. Let’s just go and investigate first.”

“But what will we tell mom? She will be worried if we don’t come home after school.”

June thinks about this, “You’re right, we need an excuse. What should we tell her?”

“Why don’t we tell her that your bicycle has a flat tire?” Nari suggests.

“No, if we tell her that, she will come to school to pick us up. Let’s tell her that there is a school meeting. That will give us one hour to investigate the beach.”

June doesn’t like lying to his mother, but this is a special situation. June’s mother is very busy. She teaches Korean to Vietnamese students at a university. She teaches almost every day. June’s mother believes him when he tells her that there is a school meeting. He feels guilty about lying to her. Maybe he will tell her the truth tomorrow after they investigate the beach.

At school, time goes very slowly. June doesn’t want to study math, history or English. June keeps thinking about the jellyfish men on the beach. What if they really are people? Maybe there are many of them and they are dying on the beach!

Finally, the school day is finished. June and Nari don’t say goodbye to anyone. They rush to the bicycle and June cycles as fast as he can to the beach.

June and Nari go to the part of the beach where June found the jellyfish man. There is still a lot of debris on the beach, seaweed and pieces of wood. They look around the beach for a long time but they don’t find any jellyfish.

The sun goes down and it is dark. June and Nari use a small flashlight to search the beach. It is getting late and June’s mother has called many times. If they don’t go back soon she will be very worried.

“Come on Nari, let’s go home. There aren’t any jellyfish on the beach,” June says.

“Wait, what’s that?” Nari says pointing to the ocean.

Out in the ocean, about two kilometers from the beach, the water is glowing. It is a bright green color. The light isn’t coming from any boat. The green colored light is coming from the water!