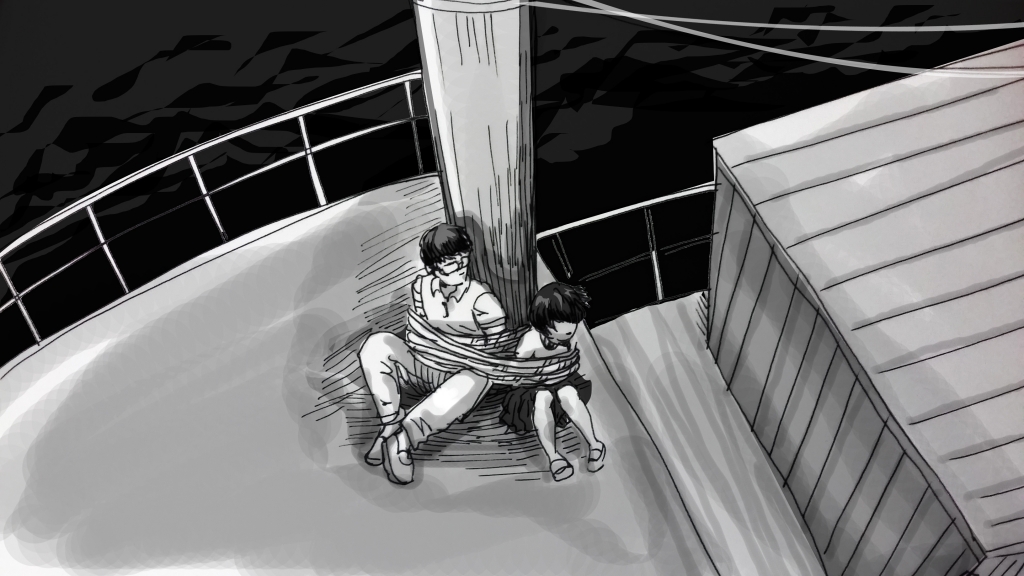 Welcome to the finalÂ installment of TEFL Express’ first serial graded reader, “Discovery at Vui So Beach”. This story is divided into four sections that will be posted every Friday. The final installment will be ready on Friday, October 30th, just before Halloween.

If you missed Act I, you can find it here.

If you missed Act II, you can find it here.

If you missed Act III, you can find it here.

At the end of each installment, you will see a button asking if you want to download the lesson pack that accompanies the story. Each of these packs includes: a vocabulary list, a vocabulary exercise, comprehension questions, grammar links to the story and class extension ideas. Using one installment of the story in class could take anywhere from twenty minutes to one hour, depending on how much of the lesson pack you use. Read on for the end of the story.

When they climb up the ladder, the leader of the men asks them many questions. Nari begins to cry, but June tries to answer each question honestly and simply. The man doesn’t know what to do, so he ties their hands up using zip ties. After that he ties them to the mast of the ship so they can’t move.

The man is wearing a baseball cap and a long thin jacket. He looks very young to be in charge. “I’m very sorry, but this is a very awkward situation. I will have to call my manager to decide what to do next. I hope you understand,” the man in the cap says very politely.

June watches the man try to make a phone call several times, but no one answers. The other men continue to dump the barrels of green glowing liquid into the ocean. Now that they are closer to the men, they do look a little like fish. They smell fishy too. They even complain about it.

“I can’t wait to finish this job,” one of the men says, “every since we started my skin is very slimy.”

“Yeah me too,” another one says, “and something strange is happening to my hands and feet. I think they are becoming webbed.”

“Well, once we get away from this stuff I’m sure we’ll be fine. Come on, let’s hurry up,” one of the fish-like men says pointing to the barrels.

June is scared. It’s bad enough that he is in such a dangerous situation. It is even worse because he is here with his sister. He is looking for a way to escape, but he can’t think of anything. He does notice a company name on the boat: Next Co.

The same name is on a flag that has been lowered. It must be the name of the company that owns this boat. The flag is so low that you can’t see it unless you are very close to the ship. They must not want to be seen. Whatever is in those barrels must be very dangerous.

The men finish emptying the barrels into the sea. They are very tired and lay down on the deck of the ship. “Can we go home now boss?” one of them asks their young leader.

“Not yet. I don’t know what to do with them yet,” the man points to June and Nari.

“I think you know what we need to do boss,” one of the fish-like man says.

“Shut up. We don’t do THAT unless we are told to.  We will wait,” the man says lowering his baseball cap and leaning back in his chair.

After about ten minutes, everyone is asleep. June can hear them snoring. If they are going to try and escape, now is the time. It is almost like Nari can read his mind. “Okay, let’s go,” she whispers.

Nari waves her hands in front of his face. “How did you do that? How did you get free from the zip tie?”

“It’s easy. When someone wants to tie your hands, you should make fists. It makes your wrists larger. That way, when they are gone, it is easy to slip out of. I read it in a book,” she whispers happily.

“Ok. Did your book tell you how to get out of this?” June says, talking about the rope that is tightly wound around their bodies and the mast.

“Easy. All we need to do is breath in really hard. Then I think I can get out,” Nari explains.

They do this and in a few minutes Nari is standing up, free from the rope. She really is quite good at these things. She unties June and they both tiptoe back to the ladder. The small fishing boat is still there.

“Ok. Let’s get back in the boat and go to the beach. Maybe we can get there before they wake up,” June says.

The brother and sister climb as quietly as they can down the ladder. June is very nervous. The men on the boat might wake up any moment. He doesn’t want to think about what they will do if they find them.

June begins to row away from the ship. He is trying to move quickly but without splashing any water. The moon is very bright and the small fishing boat would be very easy to see if the men wake up. “Look!” Nari says pointing into the glowing water.

June looks down into the ocean. There are many strange animals floating near the surface. They are easy to see because the water is glowing. They are almost like little monsters.

There are crabs that have fins instead of legs. There are fish with very big heads and very small tails. There are turtles whose heads are long like an eel! It is the glowing green liquid. It is changing the animals that it touches.

“Be careful not to touch the water,” June says.

June also is very careful not to touch any water as he rows the boat back to shore. They are about halfway to the beach when June hears the motor of the boat start. His heart begins to beat very quickly and his hands are sweating. Is this how he is going to die?

However, the boat doesn’t move towards them. Instead it turns around and goes further out to sea. June sighs with relief. They are safe…for now.

When they get home and tell their mother their story, she hugs them both tightly. After that she brings them to the police station to tell the police what happened. It takes a long time for them to find a police officer who speaks English well.

The police officer listens to them talk about men that look like fish, getting kidnapped and about the glowing green liquid. At first, he think they are crazy and he laughs at them. June shows the man the red marks on his wrists from where the zip tie was. Still, the officer thinks he is lying.

It is only when June says the company’s name, Next co., that the police officer gets serious. “Where did you hear that name?”

“I didn’t hear it. It was on the boat,” June says very frustrated.

“Thank you for your help, we’ll contact you later,” the police officer says quickly putting on his jacket and leaving the room.

The next day Nari and June don’t go to school. Right now their mother is being very kind to them. She even made them their favorite breakfast of pancakes and eggs. Nari and June are both afraid that later she will realize that they lied to her. Then she won’t be so nice.

June and Nari are sitting in June’s room. Nari is on June’s bed reading a comic book and June is on the computer. Usually, he can’t stand her being in his room, but today he doesn’t mind. He is busy on the computer.

June is trying to do research about Next Co., but can’t find much about them online.Â  They have a website but it is very plain and doesn’t have much information. All that June learns is that they are a global company. Then he finds a news article from the local English newspaper.

The article was only posted thirty minutes ago. The article says that one of Next Co.‘s ships had a horrible accident. One of their ships hit a rock and leaked some chemicals into the ocean. Next Co. is taking full responsibility and is cleaning the area.

“That was no accident!” June says angrily.

He shows Nari the article and they both start thinking. They have so many questions that might never be answered. At least they are cleaning the ocean and it will be safe for the sea animals, June and Nari agree. They both go to the aquarium to look at Taiiji.

“So maybe he is the only jellyfish man,” Nari says.