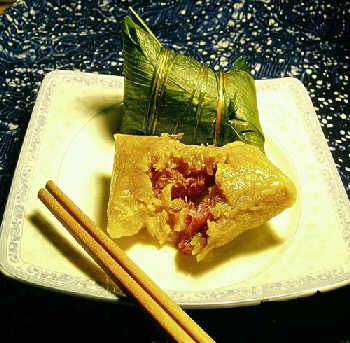 The TEFLCast, guests and I often discuss travel. It’s something many TEFL professionals have an interest in and teaching abroad can almost cater specifically to travellers. TEFL provides enough holidays to explore your surroundings, and if you are located in Asia you also have affordable access to almost any location within Asia. The true is the same for most locations, Europe, South America and Mexico especially.

This past weekend was The Dragon Boat Festival in China, where I am located. During this time, you can find zongzi to eat almost anywhere from upscale restaurants, to convenience stores and even vendors on the street. Zongzi consists of rice wrapped in either bamboo or corn leaves and is then steamed. It can also include a large variety or varying fillings.

The holiday originates from the story of Qu Yuan, who was wrongly exiled by the King. In his exile he wrote many poems, which expressed how upset he was of his false exile, allowing the people to see his true feelings. When he could take no more, he drowned himself in Miluo River. The locals tried desperately to save him, now knowing his exile was wrong thanks to his written words, but they were unsuccessful.

The people threw rice into the river as an offering to Qu Yuan, also with the intention of feeding the fish so they would leave his body alone. Since then, people all over China eat zongzi to celebrate both his memory and the attempted rescue by the people.

I’ve been present in China for numerous Dragon Boat Festivals now, and as much as I enjoy it, we decided to do something new this year. My wife and I also wanted to get a little rest and relaxation versus breaking out our backpacks, so we booked our hotel and flights, and headed to Hong Kong for a few days at Hong Kong Disney.

We packed our bags and flew from Beijing directly to Hong Kong airport. The flight was affordable, even though it was three times the standard fare due to the holiday, but if you want to save money you can cut down a large portion of your flight costs by flying to Shenzhen, China, in the mainland. From there you can take a short underground, and underwater, subway ride that joins the regular Hong Kong metro.

On this trip, we focused all of our time and attention on Disneyland since our trip was going to be short and we have seen Hong Kong in the past but never visited Disney Park. We figured the best way to do this was stay right at the resort hotel.

We arrived around mid-afternoon. The resort was busy due to the holiday, so we had to wait a little bit for our room. While we waited, we left our bags with the front desk and explored the resort. First, we sat in the lobby and took in some amazing music. A live pianist played classical music and famous Disney soundtracks. He was an incredible musician.

In the back was a beautiful garden area with a hedge maze, like the one at the end of Stanley Kubrick’s: The Shining, only much more peaceful. Off to the side was a lovely gazebo with massive hearts trimmed in the greenery; the perfect place for booked wedding photos on the resort.

A little more back was the shore of the South China Sea with a view that overlooked downtown Hong Kong, complete with a pier that housed ferries to transport guests directly downtown to explore the city. It was extremely serene. Our next stop was the pool, as the heat and travel had taken its usual toll. The pool was large enough to not be crowded and remained relaxing every step of the way. It even came complete with a waterslide that my wife and I had the proud distinction of being the only non-toddlers to enjoy.

We spent the rest of the afternoon in the pool and exploring the resort, which offered anything and everything. I didn’t have nearly enough time to enjoy it all, but that’s what next times for. That evening we went to Disneyland for the end of the day fireworks display. I’ve the display in the Orlando Park in the United States and was excited to see another show, as it was truly impressive.

The display at Hong Kong Park was just as amazing. The direction and organization involved in setting up such a nightly event easily show the amount of care and love that has gone into the fireworks shows. You haven’t seen fireworks until you’ve seen the closing fireworks at a Disney Park. Unbelievable! Once the show ended we made our way back to the resort. We walked the Disney promenade, which is a lovely bricked road full of Disney character portraits and music from the soundtracks, which takes ten minutes from the park gate to the resorts front door. Then we called it a night.

The next morning we woke up at 7:00 am and had breakfast with some interesting characters, and we headed right back to the park for the days opening.

We spoke with a Chinese family also on holiday, and helped each other take pictures in front the of Castle; a regular photo opportunity for all visitors. At the Orlando the castle is Cinderella’s Castle, while the one in Hong Kong is Sleeping Beauty’s, so it’s a real treat to get your picture at a different Castle.

We spent the day enjoying the rides and shows. We rode the roller-coaster, we saw the cultures of the world conveyed on the famed It’s a Small World and caught the live Lion King show. We also got to take in the daily parade!

The park was the perfect size to do just about everything in a day, and between rides we were lucky to run into lots of interesting characters along the way!

The next morning, we packed for home and departed, feeling rejuvenated and thrilled. If there is one thing we will both be forever grateful for, is the TEFL field allowing, and encouraging, us TEFLer’s to continue exploring. After all, that’s why we all do what we do. Keep exploring!

< What does course accreditation mean?
Is A Cheap TEFL Course Worth it? >