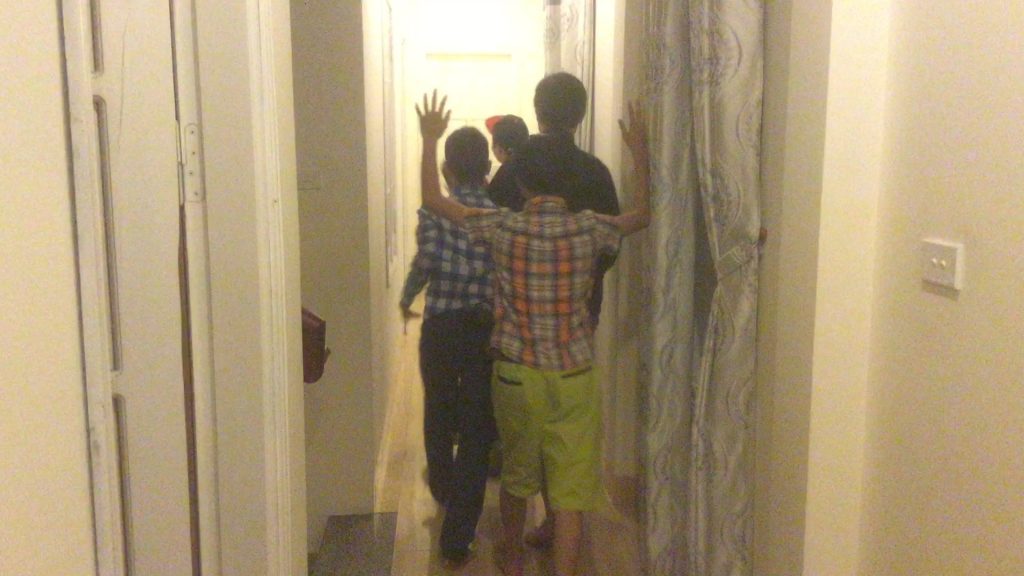 Sometimes, especially if you’ve had the same class for a year or more, things can start to get a bit stale. No matter how many new vocabulary games, roleplays and fluency exercises you pull out of your hat, it feels all too familiar to the students and to the teacher. This is how I was beginning to feel with my pre-intermediate teen class that I’ve had for nearly two years. This is why I decided to do something different and, for a short time, turn my class into a studio.

I’ve done a lot of strange lessons and projects with this class before, but never as ambitious as a short film. Read on to learn about the steps that I took to make this idea into a reality and also, some mistakes I made along the way. Hopefully, you can avoid the same pitfalls and have an easier, more successful, film experience than I did.
If you want to see the finished product, you can get access to the video by clicking on the button below.

When I mentioned this project to some other teachers at my school, the first question that they had was, “Why are you doing this?”. I suppose this is a valid question. There is nothing in a TEFL syllabus that is going to mention a film project (unless of course, you were at a very particular school). Most of us simply follow the curriculum set out for us and try to teach as well as we can within that.

However, I’ve always been a big believer in leaving time in the syllabus for projects. What a textbook does is to try to create a context for students to learn and practice language. Before teaching sequence adverbs, the book probably has an example of somewhere you’d see these in real life (e.g. a cooking show, directions, someone telling a story). When doing a project as a class in English, you aren’t imagining a context, you are creating a real context.

My aims for this project were to have the students work together, in English, to create a task list, share their opinions, agree or disagree, describe scenes, pictures and costumes, brainstorm potential problems, give directions and much more. I didn’t have to create a game or fake situation for this to happen, instead, the use of this language came about naturally.

A project like a film is also a good way to work on classroom dynamics and getting your students to work as a team. The best thing that came out of this project was how motivated the students were throughout the project and how proud of their work they were at the end. Had I told them to spend hours and hours writing scripts and designing scary masks outside of class, I’m not sure they would have done it. However, with the goal of making their film as cool as they could, they did this of their own volition.

Steps and Scheduling in Time

Based on my recent experience, I’d say that you need at least five hours of class time to make a simple film. At my school we have 1.5 hour classes twice a week. I didn’t want to have this take up two complete weeks of classes so I broke it up a bit. Below is the breakdown of the schedule.

Week 1 (thirty minutes at the end of one class):

I introduced the idea of the video and we brainstormed some of the important aspects. We decided what genre of film we wanted to make, how long we thought it should be, where we would film it and also a lot of different ideas for the plot. At the end of the class, I asked them to think about this throughout the week and come back with at least one different idea.

Week 2 (forty-five minutes at the end of both classes):

The homework for myself before the next lesson was to come up with a basic task list for making the idea of the film into a reality. When we returned to the film project for the second half of class I had them add to my existing list of tasks and we designated them to different individuals. Some of them had to work individually, while others worked in groups.

For part of the first lesson and the whole forty-five minutes of the next session, I had the students work on their tasks while I helped and gave guidance. In the end, this was very much their film. I had very little to do with it except helping to facilitate things.

I did have to assign a few things for homework so that we’d be ready to start filming the next week. Actually, “assign” is the wrong word. I told them we would be filming next week and asked if they’d be ready.

We spent the beginning of the first class tieing up loose ends and getting the different rooms of the school ready for filming. Then, using the storyboard, we proceeded to film the scenes. Between each scene, the students gave each other directions for how to act and what to do differently. This took a long time, but was fun and included a lot of natural conversations that would have been difficult to create an atmosphere for in the regular classroom. For example, naturally using comparative adverbs (e.g. “Move more slowly.” “Speak more naturally.”).

After this was done, I edited the film at home (only two hours) and whalla. We had our first class film. I’ve since shared it with the class and, though they found it embarrassing at points, in general they were pleased.

What I would do differently

All in all, I think that the project was a success. The students had fun and all of the aims that I laid out in the first section of this post were met. However, as I’m not a film major, there are a number of practical things that I would have done differently.

Firstly, I would advise anyone thinking of doing this to make sure that they film everything in one location before moving on. When filming, I followed the storyline, but this caused a lot of moving back and forth from room to room. A simple solution is to make a list of every scene that needs to be shot in a location. It doesn’t need to be in sequence; you can do that later.

Another thing I wish that I’d done is to model the script line by line before letting the actors go for it. I didn’t want to interfere too much, but as you can see in the final product, there are a lot of pronunciation errors and poor sentence stress. This could, and should, have been my role during the filming.

I feel like I rushed through this project a bit. One more week would have really helped things out and I’m sure I could have found a way to tie target language from the book to different tasks. This would have justified me spending about a month working on this project. Again, not each full class, but a little bit at a time.

Lastly, I should have tried to get a hold of a better quality camera. I filmed this on my phone. This is ok, but the audio and screen quality could have been better.

Want to see the finished product? You can get access to the video by clicking on the button below.