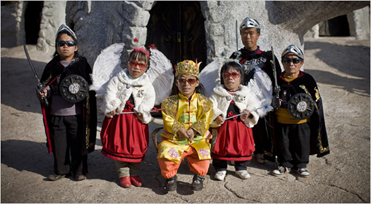 Rich in culture and steeped in history, China is no doubt one of the most extraordinary countries in the world. A vast country with a population of over 1.3 billion, its massive population and booming economy results in a huge demand for TEFL teachers to teach English. Over 70% of the Chinese population speak Mandarin while other popular varieties include Wu, Yue, Min and Hakka so learning English is extremely important to the Chinese people. With lots to do and see you will never get bored.

Of course when in China you should not miss out on visiting the amazing Great Wall, the Giant Pandas of Chengdu, the Forbidden City of Beijing and Hangzhou city also known as “Paradise on Earth”. It doesn’t get much better than that! Or does it? Why not discover another side of China? Apart from its tourist hotspots China has many other wonderful things on offer that may be slightly off the beaten track.

If your TEFL position requires you to work evenings or weekends you will be by no means restricted to the entertainment that China provides. That’s for sure because in China the weekend never ends! It is a country that never sleeps with fun, entertainment and adventures on offer 24/7, can you handle it?

Late Night Show
Beijing is extremely popular for its night time acrobat shows that will have you sitting on the edge of your seat with suspense! Visit Wansheng theatre where you can catch the Beijing Acrobatic Troupe performing their amazing talents to the captivated audience. Other popular shows include the Chinese Kung Fu show held in the Beijing and Shaolin Temple. The Beijing Opera is one of China’s national treasures with a history of nearly 200 years. It is an artistic scene of musical performance combined with dance and martial arts. A magical experience of Chinese culture that cannot be missed!

The Kingdom of Little People
Visit this theme park located near Kunming that is a little far from the norm! It features more than 100 little people that put on a variety of shows and acts to entertain its many tourists, including their version of “Swan Lake”! Recently featured in Sky ones “An Idiot Abroad”, the park has been under some scrutiny, however it has been argued that the park provides the little people with homes and jobs that they would otherwise find difficult to get. Visitors find the park fun, entertaining and surreal. 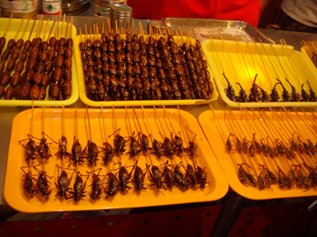 Chinese Street Food
In most Chinese cities and towns you will find the streets are lined with stalls selling all sorts of exciting and bizarre foods that can be described as mouth watering or stomach turning depending on personal taste! Chicken feet, roasted duck heads, pig snout on a stick, bugs on a stick and fried starfish are just some of the weird and wonderful snacks you might find. Or why not give stinky tofu a try? It gets its name for a good reason. If you can get near enough to it without falling over then give it a try! Or maybe candied fruit sticks might be a safer option. 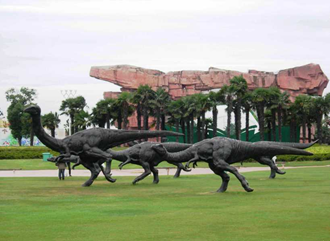 Changzhou China DinosaurPark
Changzhou China Dinosaur Park really is China’s version of Jurassic Park! This dinosaur park has science-based attractions combined with theme park rides all located within the park’s ecological environment consisting of 70 different types of trees. Each year the park is host to the International Lantern Festival, where visitors can enjoy a firework and lantern display. Visit the museum that gives its visitors the opportunity to see real life fossils and skeletons of dinosaurs, reminding its visitors that these fascinating creatures really did walk this earth once upon a time. Amazing! 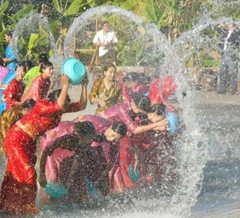 A Water Splashing festival?
Every year the people of Xishuangbanna in Jinghong enjoy a three day festival to celebrate the New Year usually taking place March/ April time. The festival features a dragon boat race and a water splashing ritual which takes place outside the Buddhist temple. The ceremony has a fun and religious element, bringing in the New Year. At night the Dai people float lanterns on the river which is believed to bring good luck! 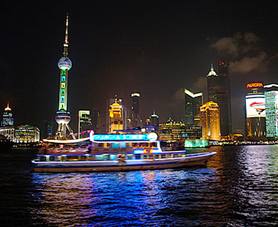 Huangpu River Night Cruise
A night time cruise along Shanghai’s Huangpu river is a must do when visiting this pretty city. Best done at night when the spectacular coloured lights of Shanghai city are revealed. The ship departs from the Bund and heads towards Nanpu Bridge, where it turns and cruises to the Wusong Kou before returning to the Bund. While in this great city, enjoy some chill out time with many bars and restaurants to choose from. Shanghai nightclubs and bars are always hopping with partygoers from all over the world! Popular clubs include the international club M2; Muse Park 97; enjoy some high end Shanghai nightlife at the famous Bar Rouge or alternative music at The Shelter.