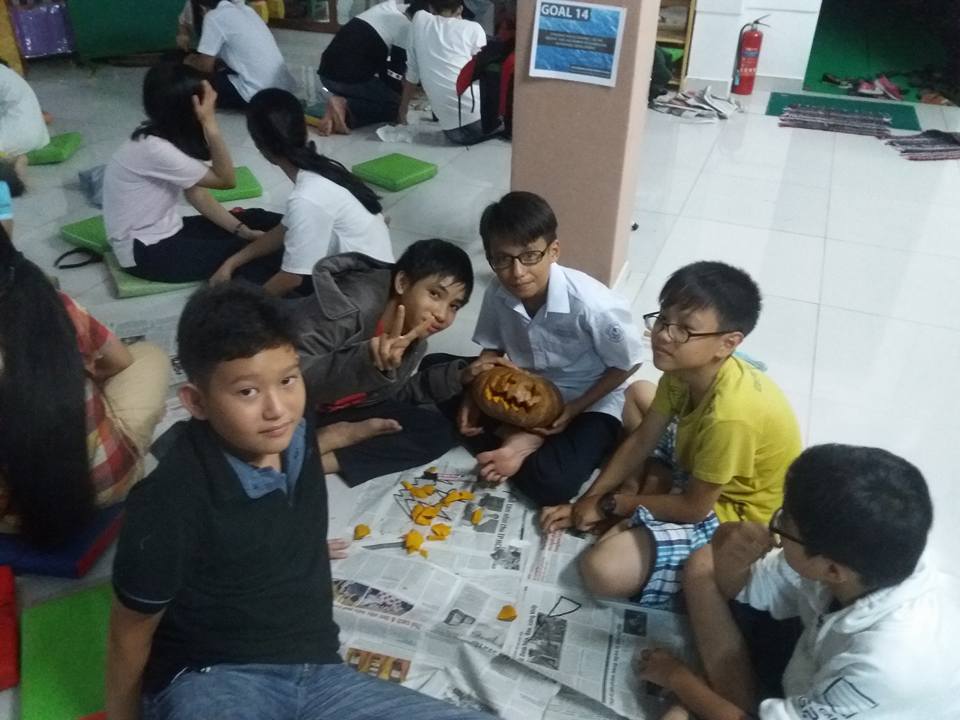 “So they won’t be learning any English?” a fellow teacher asked me the other day.

We were discussing a Halloween party that I had been planning for teen students. He was interested in what activities would be involved and, as an older British man, what Halloween really is. I told him about the apple bobbing station, the mystery boxes full of monster brains (noodles) and dead man’s eyeballs (grapes), the dress-up photo station, the pumpkin carving, etc. I went through the long list of activities and he was right to point out; this was not an English lesson. Primarily, this was a party.

Read on as I debate the merits of parties for your students both in and out of the classroom and share my tips for how to make these events successful. If you just want some party ideas, you can gain access to a free resource full of ideas by clicking on the button below.

Is This a Party or a Lesson?

Firstly, I’d like to point out that I’m a big believer that it is a teacher’s responsibility to search out and make use of “teaching moments” whenever possible. Having said that, there is more to your students than just language learners. For example, I have one teen class where five of the students always come in slightly late. They’ve just finished a different after school class and have rushed on their electric bicycles to my school. They are usually finishing up their fast food meal for the evening as they enter. After my class, some of them have another class! That’s a 13-14 hour study day!

My point is that there is something to be said for making entertainment the primary aim of a class or school party. They don’t happen all that often. In the classroom, I only organize parties after the students have finished the course. That’s once every four months. As for school events, they only happen quarterly. Having a party as a reward every once in a while isn’t going to damage the students’ language learning.

As a matter of fact, when you take the pressure off of turning the class party into a lesson, a number of positive things happen. It’s a good chance to work on classroom dynamics and to foster a feeling of teamwork. Also, having a party as a reward is a good motivational tool. Some teachers are probably reading this right now and cringing, thinking that learning should be its own reward. Look, I’m not talking about handing out a slice of pizza every time a student gets an answer correct. What I’m saying is that it’s important to acknowledge students’ hard work.

Also, I’m not advocating an English-free party or event. By creating a fun atmosphere out of the regular class setting, you are creating a new context for English usage. Instead of having a roleplay where students are organizing a party (I’ve done this many times), the students actually are at a party and interacting in English.

In the example of the Halloween party, some of the activities that used English were: a movie scavenger hunt (looking for things in a short scary film), listening and checking complex instructions for pumpkin carving, scary story sharing, polite requests for food and using monster vocabulary at the dress up station. Seasonal parties can be a good chance for teachers to share about their culture in a fun way.

What Ages are Parties Appropriate for?

When I used to work in Korea near Busan University, the center that I worked at had an interesting policy. At the end of each one-month course, the class was allowed to have a party. The parties could either take place in the classroom or out of the classroom. So, once a month, it wasn’t uncommon for teachers at this center to spend their day hanging out with students in cafes, parks and even pubs. These were, after all, university students and adults. Many of the students expressed that this was their favorite lesson of the month because they were able to talk to their teacher out of the classroom.

Now some teachers took advantage of this policy and, looking back, I can definitely see the danger of a once-a-month “pub lesson”. However, it was clear that this informal lesson style was good for students’ confidence using English outside of a classroom setting. Many of these students, though they had an intermediate level of English, were still too shy to use it out of the classroom. Class parties seemed to help them make the transition from study to practice.

Some Party Planning Dos and Don’ts

I suggest that you start planning any large-scale school party a minimum of two months in advance. You won’t have to start doing all of the work, but having an initial meeting this far advance lets you create a large task list in phases. Some things take a long time to organize or make. For example, if you want to have some children perform a song or a short skit, these things can’t (or shouldn’t) be done in one week. Also, planning far in advance makes it easier to get all the necessary materials.

There are a lot of free organizational software options out there (Producteev, Asana, Trello, etc.). Whatever you use, make a task list with DRIs (directly responsible individuals) for each task and with deadlines. Also, you’ll want a shared calendar of some kind so those involved in organizing can keep on track. You’ll also want a large materials list and a system for establising a budget for each item. Lastly, for the day of the event, you’ll want a “script” of what is meant to be happening at each phase of the party and who is overseeing what section.

… do it all yourself.

I’m guilty of this and it’s always a mistake. If it’s an in-class party, you are probably on your own unless you can convince a friend to help out. For anything larger-scale, don’t be afraid to enlist fellow teachers, admin staff or your manager. This is a team project for the good of the program, so it shouldn’t just be you working hard for it.

If you try to do it all yourself, you are more likely to miss things or have things go wrong during the event. Also, it won’t be nearly as fun.

…worry if it doesn’t go exactly as you envisioned.

It won’t turn out exactly as you planned it. Don’t worry.

…stress out during the event.

This is piggypacking the previous point. If you plan for the event properly, the event itself should be fairly stress-free and fun. Try to enjoy all of your hard work and spend time with the students. That was, after all, the goal of the event.

…spend a lot of money needlessly.

Create a budget and don’t stray from it. For almost everything there is a cheap option and an expensive option. For example, buying/renting a Batman costume or making a Batman costume. Renting a theatre to show a scary movie or borrowing a projector and projecting a film onto a white sheet. More expensive isn’t always better and these days there are always cheap and creative alternatives online.

…encourage the students do the activities in English as much as possible.

I know I’ve just spent a lot of time discussing the importance of making this a party and not just another lesson, however, this is a valuable time for the students to USE the English they HAVE. Don’t waste the opportunity. Try to make it as natural as possible and tailor your requests based on their level.

…ask your students for input before and after the event.

Don’t just try and guess what they want, ask. Also, I think it’s best to get immediate feedback after an event. You can do this by saving the last five minutes for students to fill out a quick survey about the event. This will help you better plan for the next event and see what the students really thought.

…make the students’ interactions with each other the focus.

Don’t be the center of attention. This is about the students, so plan plenty of activities that allow them to interact and work together.

…plan an afterparty for all the staff and teachers involved.

This is how you can thank everyone. You’ve all been working hard to make the event a success and it’s time to blow off a little steam. Put in just a little more effort and plan a simple post-party for your team. It can be as simple as an email saying where everyone can go after the event.

…check out the resource below with party ideas.