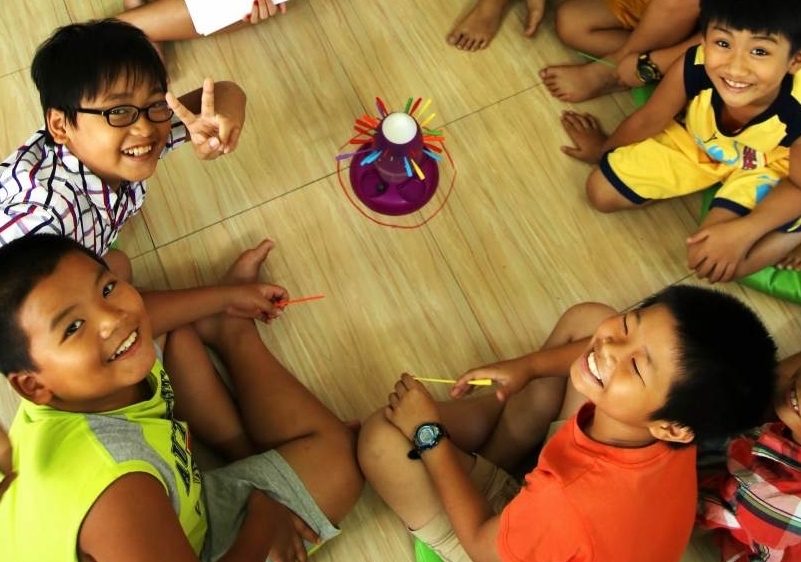 Read on for my justification of why pronunciation practice with young learners should be an essential part of any English curriculum and some ways to incorporate more pronunciation activities into your lessons.
Should you be using the International Phonetic Alphabet in your classroom? You bet you should. This will help even young learners differentiate the sounds of English. You can gain access to a chart by clicking on the button below.

How to make pronunciation practice fun

As I’ve mentioned many times in this blog, the key to motivating young learners is to make the lesson fun and engaging. Teaching phonics and pronunciation to children is no exception. How do you do this? Same as most aspects of TEFL teaching–gamification.

With adults, it’s useful to show them the correct mouth shape when trying to show them how to make a sound. Due to the difficulty, and slight disgusting nature, of showing them the inside of your mouth, one way around this is to draw a crude picture on the board. In a similar way, this can be done with children. To make it fun, you can draw a zombie head instead of a normal human one. That, or associate a funny animal sound that coincides with the sound you want them to make and draw it next to the head. For example, /z/ could be associated with a buzzing bee.

Also, when presenting certain features like plosive or non-plosives, you don’t need to teach the technical terms. With adults, it’s enough to have the students put their hands in front of their mouths and check that there is breath coming out when using a plosive. For example, /p/ is a plosive (air comes out of your mouth when you use this phoneme) and /b/ is not (no air). For young learners, to make it more fun, why not hand out leaves or something of that nature and they can tell you if it blows or not when they use a plosive.

The same pronunciation features that are taught to adults can be taught to children as long as you stay away from technical jargon and take the extra effort to make it fun. As for practicing the different sounds, the possibilities are endless. Many of the activities you do with adults can work, just with some added fun. Here are a few examples:

This game is for working with minimal pairs. You could have three different phonemes in different parts of the room. The teacher, or a student, says a word with a particular phoneme and the students run to that section of the room. To spice it up, why not have the teacher pretend to be a monster of some kind (I like zombies) and slowly chase the students to the correct phoneme.

Also for minimal pairs, or for reviewing a lot of different sounds. The teacher writes two sets of cards. Each set of cards has the identical words on them. These words are also on the board. The teacher says a word and the two students race to switch seats. Whoever sits down first gets a point. The winner says the next word.

This is a good listening activity to help students differentiate the sounds. Write the sounds you are trying to practice on the board (make sure that there are some example words and that you practice the sound first). Under the sound, write a number. The teacher will give the students a secret code by saying a series of words with the different phonemes. The students should write the corresponding numbers on their paper and see if they get the secret code. After a few rounds, this can be done with partners.

After practicing the sounds, choose a list of words that include the phoneme. Now, with the help of the students, put the words into a long sentence. Have the students try to say the sentence three times in succession as fast as they can.

Why pronunciation practice is so important for YL

The critical period hypothesis for language acquisition was first coined by Montreal neurologist Wilder Penfield. The basic idea of the theory is that children are biologically better equipped to learn a language when they are young and that, over time, this ability decreases. While Penfield’s initial research was about a child’s L1 (first language), many linguistic researchers extended the idea to second language acquisition. This is still an area of debate as to the extent of a critical language period for a second language, however, there are definitely certain advantages that young learners have when learning a language–this is especially true of pronunciation.

Firstly, children aren’t as scared of making mistakes. Last night I taught a beginner adult class. In this class was a strong attractive man in his late twenties who was simply too cool to choral any of the questions we were practicing or the word stress for countries/nationalities. Eventually, I coaxed him into trying, but his pronunciation practice during this class period had suffered.

Children aren’t as focused on being cool as adults are. With the correct leadership in the class, they will gladly step out of their comfort zone. Additionally, as their L1 is not as deeply entrenched, they are open to the differences that an additional language has. As any TEFL teacher knows, it is extremely difficult to train entrenched pronunciation errors out of an adult student. Younger learners come to you, not with a blank slate, but one with more open space to write upon.

One thing that every TEFL teacher of young learners encounters in phonics. There are two main theories of how to teach students phonics: analog and synthetic. The basic difference is that analog phonics focuses on one or two sounds at a time and focuses on the position of that sound in a word (e.g first letter phonics “a”=apple, “b” = banana). Synthetic phonics, on the other hand, is meant to focus on all of the sounds in a word at once. Exposure to these sounds over time is meant to lead to a more natural acquisition of the sounds of English.

Whichever approach you adopt (this will largely be based on the school you work for or the textbook you’re using), it is important to be aware that you are teaching these sounds. Likewise, it is important that you be a good model for your students and listen carefully to their pronunciation. Personally, I like to use a little of both models.

In my opinion, synthetic phonics naturally happens as students are exposed to more and more words and sentences. While it may not be the specific focus of an activity, it is still going on. That said, having a structured curriculum of phonics using the analog approach, ensures some class time where these specific sounds are the focus. It allows the teacher to check students’ pronunciation of these sounds as well as give them extra practice.

My best practices, in terms of a phonics curriculum, are to first teach initial sounds like the example I gave above. After that, the students know the alphabet. Then I focus on final sounds (“t”= net, “d” = bad). The next step is to teach short vowel sounds in the word, then long vowel sounds. Finally, blends are taught until a student is fairly confident knowing how to read any word.