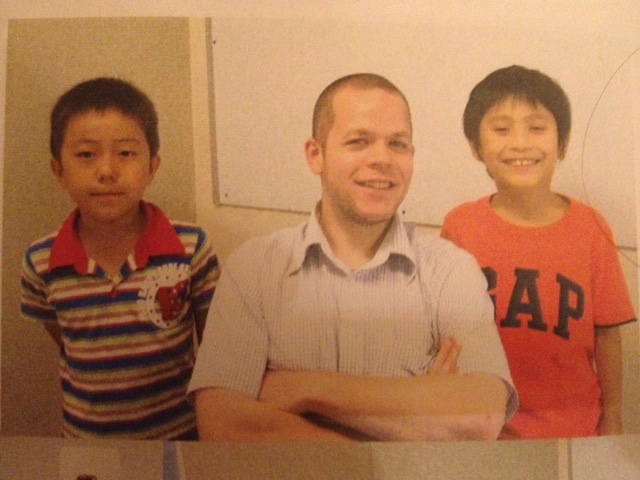 First off, an introduction, my name is Mark, I have been teaching English to non-native speakers of English for about 12 years now. I have worked in China, Poland, some summer school work in the UK and I have lived and worked in Japan too– I live there now as a matter of fact.

For the majority of my work, I stayed in the same place for only a relatively short time: 16 months in China, 9 months in Poland and a few stints of working the summer months in the UK. In all these cases, students came and went, or I came and went and the longest I taught the same students was for a year and a half. Perhaps this is quite normal. Most jobs involve a short stint of teaching before one or other of the parties (teacher or student) moves along; a truly long time of teaching the same student is rare.

Well, I have been in Japan since 2007 and this is by far the longest time I have spent in any country aside from that in which I was born. Seeing as I am married to a Japanese woman, I cannot foresee a change coming in the near future. I think this will be my home for a long time.

Anyways, since coming to Japan, I have had the opportunity to find myself teaching at what is known as an “ikaiwa”, this is basically an English school that you find in the vicinity of a train station and which usually belongs to a chain or as part of a large company that dominates the English teaching market. The company I work for, Shane, has schools all over the Tokyo and Kanto area of Japan. The principle customers we teach range from young kids from age 2, right up to learners in their 80s or 90s. It is not uncommon to find yourself teaching both sets of students, and many in between, on the same day.

Since starting work in Japan, I have taught hundreds of students, quite literally hundreds, moving through classes and coming and going as regularly as you’d expect. Some stay for a few months, most stay for a couple of years at the most before work transfers or the need to go to cram school stops the younger students from coming.

In most cases we form a professional bond, study together and move on, a sort of sushi conveyor belt of English learning if you like. However, and most wonderfully, I have been privileged to find students staying longer, and I have been teaching some students for almost 8 years. That is a week in and out, through the seasons and through the changing times of their lives.

Almost all of these students I teach on Monday because I have worked at the same school for the last 8 years, and I can list a speech therapist, a couple of housewives and two young lads who I have regularly been teaching.

In some ways, it is strange to think that we are still, at least with the adults, as formal and proper as we have always been. The Japanese thrive on formality, familiarity and a little distance between the teacher and the student. The classes run the 50 minutes allotted to them and we keep things pretty formal. We follow the text, and the relationship we share is the formal student-teacher relationship that the Japanese find typical and reassuring. I have not met them outside classes aside from school events and there is a polite reserve between us, a distance if you will, that keeps things from being too informal. That is good for them and it is good for me.

One thing I have found with teaching the same adults for so long is that it is easier to tailor the examples I have of the target language to suit their interests and particular strengths. It is easier to model target language with the stronger student and allow the less confident students a chance to see the structures in use. This is all pretty obvious stuff to any TEFL teacher and the real joy of this particular experience lies with teaching the kids.

The two lads I have been teaching for the better part of a decade are both 12 years old now, but when I first met them they were just kids of 4. They were virtually unable to speak English and just wanted to play about as kids do. Indeed, the very first lesson we had, both lads, boisterous and full of energy, clashed heads. One of the lads, coming off worse, had to go to the hospital later that day for fear of a concussion! This was my first young learners’ class and hearing this news I was utterly certain I was going to be sued, fired or confronted by angry parents! It made me utterly uncertain as to whether I was even a competent teacher and I fretted a fair bit.

As it transpired, the lad actually had pneumonia coming on and it was nothing to do with the clash of heads, but boy was that a moment to get worried about. It is funny that of all the kids I have taught since then, it is these two who are still here.

Actually, it was on March 11th, 2011 when the Great Northeast Earthquake hit Japan that I ended up, just 2 hours after the main quake and with aftershocks happening every few minutes, teaching one of these lads. It was a surreal moment as he, 7 years old and unafraid of anything, played English games with me while the country was suffering its greatest disaster in living memory. His mother was outside the classroom with his baby sister. They were nervous and worried.

I remember that with every fresh aftershock, and with the school vibrating and shuddering, I kept asking him if he was ok. He continually said he was fine and merrily kept on playing the games that I distractedly made up on the spot to play. Unprofessional as that sounds, bear in mind it was my first ever major disaster, and I think the circumstances were unique. That lad though, he just went through it as happily as he keeps going through lessons even now.

So, how do you keep lessons fresh with students you have been teaching for more than half of their lives? Well, I think most of it lies in the bond of trust that has built up, we have a set block of games and activities that we all know the rules to and which we don’t need to explain. This makes the need for class instructions a little less time consuming to some degree, and while some may decry a lack of creativity, we do add a variation of rules and new games as their skill sets improve and deepen.

More than that though, the years we have been working together have given us all a respect for each other. I know what they can do and what they like, and they know what is expected in class from me. Yes, sure there is some rambunctiousness and a little cheekiness, but that is the prerogative of youth. Generally, these lads don’t mess about or act up. Classes are good fun and enjoyable.

While I am not sentimental about many of my students, I do regard these lads as special, I have seen them grow up before my eyes, and just the other day I noticed how much older they have becomeâ€”how grown up they are becoming. It is fascinating really and when the day comes for us to part ways, well I think it will certainly be the end of an era. Between now and then though, I look forward to many more good lessons and watching them grow up.

Hi, this is Nathan, the TEFL Express Blog Editor. Another way to keep things fresh when teaching students for a long time is to keep them focused on their goals. Click on the box above for a free Student Monthly Goal Template. This is what I use with my students at the beginning of each month. It usually requires a little guidance but is very useful as a teacher or for the student to see how they’re progressing. I hope you find it useful.