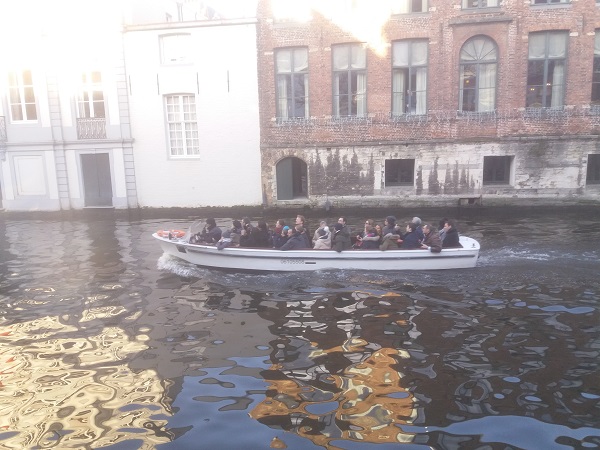 We’re taking a look at the romantic fairytale town of Bruges, Belgium. You may have heard of the historic town from the now-famous indie film “In Bruges” with Colin Farrell and Ralph Fiennes. TEFL Expressstaffer Nathan Beyerlein will do his best to convince you that this place is definitely worth a visit.

For anyone currently located near London, it’s a very short and relatively cheap bus ride away. Simply book your trip on Megabus for the best deals. You’ll go through the Channel Tunnel and then have a scenic ride through the French and Belgian countryside until you arrive in Brussels. From there, it’s a short train ride away.

For anyone already in Europe, the train is an easy and cheap option.

I’m not going to lie to you, Bruges isn’t a cheap place, especially for accommodation. Having said that, the cost of amazing Belgian beer and local food favorites is fairly cheap. To make the price of your trip more manageable, I highly recommend using Airbnb as there are many cheap deals where you’ll get to hang out with locals.

The place where I ended up was about sixty usd per night, but it included a home cooked breakfast every morning. The hosts spent a lot of time giving us recommendations, and even gave us free food for a picnic! People in Bruges rock.

What should I do?

Eat. Bruges cuisine is best had during cold climates. There are some excellent fondue restaurants and places that are famous for their mussels. However, if you want to eat on a budget, try mitraillette (basically Belgian style chips, meat, cheese and gravy). I’d also recommend waffles (obviously), sausage baguettes, the many variations of stews available and chocolate.

Drink. Belgium claims to have over 1,600 different types of beer and, based on my sampling,they are all fantastic. One great location to try them out is the beer museum or one of many beer restaurants. Many of the bottle shops will also let you tryout different beers there.

If you aren’t into alcohol, then don’t worry. You must try some real hot chocolate. They put a large chunk of Belgian chocolate on a stick, give you a cup of hot milk and you stir until the chocolate has dissolved. It turns out that I’d never had hot chocolate before.

Take a boat ride in the canals. This is a great way to quickly see a lot of the city in about thirty minutes. The tour will basically go all the way around the city, and is a good way to get your bearings and learn about the architecture.

Ok, you’ve convinced me. What else should I do?

I am a beer fanatic. What interested me the most while I was there, was visiting the Halve Maan Brewery (Half Moon). This brewery is centuries old and has an interesting family history. You can book a cheap tour, which includes a free sample of beer at the end. If you go, make sure that you try the Zot beer and the Straffe Hendrik Triple. These are strong beers, so don’t say I didn’t warn you.

Everyone in Bruges that I met claimed to be trilingual (a  mix of French, German,Flemish or English). It’s a major tourist town, and I don’t foresee any language difficulties once there.

Though I only spent three days in Bruges, I could easily write about it for pages and pages. There simply isn’t time here to talk about the cathedral that has a relic that claims to hold the blood of Christ, the clock tower or many other historic sites. This town is about as romantic as it gets. I highly recommend it for any couples out there looking for a little get away.