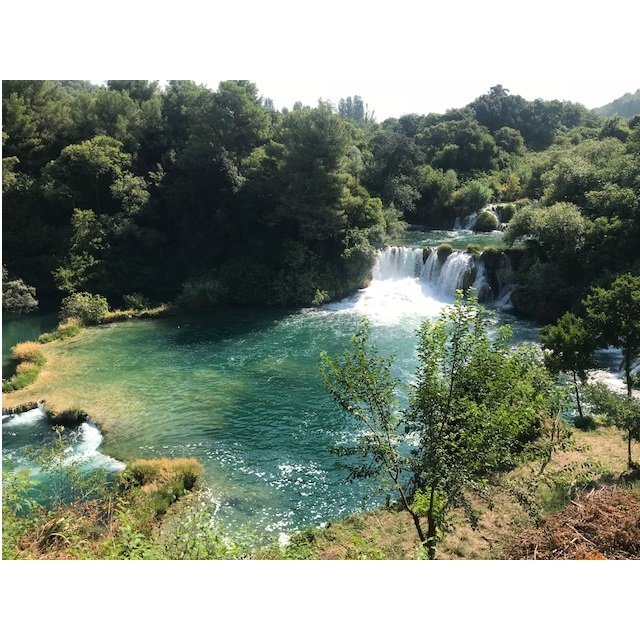 Croatia was one of the coolest countries I’ve ever been to. I felt like I was on the set of Game of Thrones for the majority of my trip, which, in my opinion, is a super cool feeling. In my opinion you need at least two weeks in order to fully experience the country and everything it has to offer.

I flew into Split, which is a coastal city located just about in the middle (between north and south) of the country. While in Split, you have the option of relaxing on the beach all day, checking out the historical aspects of the city or taking one of many excursions they offer from there. I did a combo of everything. I did a walking tour of the Old Town which was very educational and interesting. We got to see actual GOT filming locations, as well as, learn the history of the Palace, which was built during the Roman Ages by King Diocletian. Another day, I opted for an excursion to the National Park, Krka, where there were incredible waterfalls and rivers. The tour took a total of 9 hours, so it was definitely an all-day ordeal, but totally worth it.

The next stop on my Croatian tour was the island of Hvar. WOW. What a place. If you ever want to see giant yachts, this is the place to go. The island offered both ends of the spectrum – relaxation or a total party. Again, I tried to see both ends of it. I spent most of my time at the beach here, as the temperature was scorching in the middle of August. One day, I went out on a boat and explored different small islands. Did you know there are over 1,000 islands in Croatia? I didn’t either! I saw the Blue and Green caves and the filming spot for Mamma Mia 2!

After Hvar, I traveled south to Dubrovnik, the Walled City. It was an incredible place. I was there during peak tourist season, so there were people everywhere! Dubrovnik Old Town, is entirely inside ancient city walls. Originally Dubrovnik was its own separate country from Croatia, so the walls were really it’s only defense against invaders. I also did a walking tour here to hear about the history of the city. After the tour, I walked atop the city walls for an incredible view of the city, the ocean and the surrounding islands. The culture of Dubrovnik was very unique. Everyone was super accommodating and almost everyone spoke English. The food in Dubrovnik was absolutely sensational. They are known for their seafood (as most of Croatia is). Their most popular dish is Black Risotto, a creamy rice dish made with cuttlefish ink and cooked with shrimp and mussels.

The last stop on my adventure in Croatia led me to a small town called Trogir, situated just a few kilometers from Split. This was the quaintest of all the cities I visited, which was a really nice change of pace. It allowed me to see the life of Croatians a bit more clearly. Old mom and pop restaurants, stores and cafes. Trogir offered delicious food, as well, particularly, a dish made from beef braised for hours and served with butter gnocchi. The sunsets in Trogir reflected onto the water and gave a beautiful sheen of pinks and blues each night.

Open All Hours: The Weird and Wonderful China
Hong Kong and it's Magical Touch on Travellers!
City of the Month: Seoul