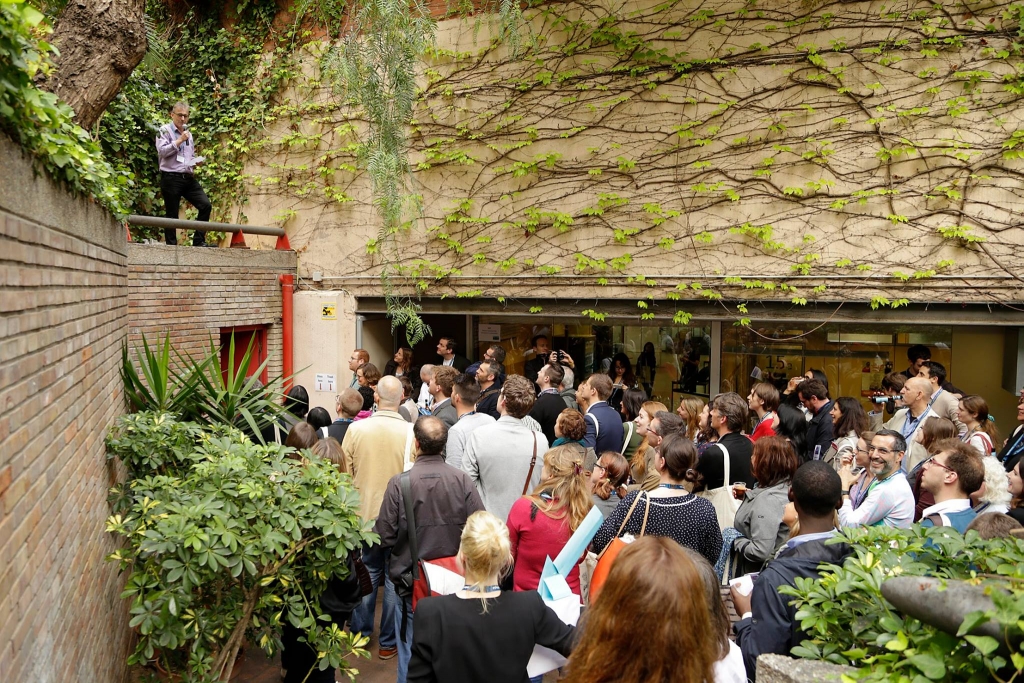 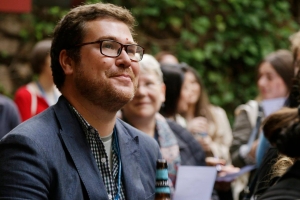 This blogger has been on the road for the past few weeks surrounding the Innovate ELT 2016 conference held in Barcelona, Spain. It was an invigorating event that led to many new friendships, innovative teaching solutions, different talks on popular methodology of the day and the raising of many controversial issues within the world of TEFL teaching. It’s going to take a bit of time to unpack everything that I learned from the event and investigate them thoroughly in upcoming posts.

Consider this post a teaser trailer of some upcoming issues and themes that this blog will be tackling in the coming months. Read on for ten things I, as a seasoned TEFL teacher and traveller, learned from my latest TEFL adventure. I also encourage you to download the resource for this post below as it contains many links to sites, blogs and social networks that I became aware of during the conference.

The prevailing industry standard has always been that the best English teachers are NET (native English Teachers) meaning that they come from a country where English is accepted as the national language and they speak it as their mother tongue. This has troubled me, especially in the past five years, as some of the best teachers that I’ve observed have been nNET (non-native English Teachers). It made me feel ashamed of the privilege I received just by the fact I happened to be born in a certain country.

This was a widely debated topic at the conference and I was eager to take part in it. I was able to hear plenaries and talks by Helen Strong, Marek Kiczkowiak, Laura Patsko and Karin Krummenacher that adressed the issue of whose English it really is, and how companies and clients are doing themselves a disservice by only hiring NET. Here are a few points that were consistently brought up during these talks:

Lesson #2 Using Stories in the Classroom

I’ve taught young learners throughout my career, and thought that the session by Melody Phillips entitled, “The Seahorse and the Mermaid: using stories for teacher development” was going to be focusing on this age group. The truth of the matter is that Melody wanted to get across the idea of the importance of storytelling for every individual, and discuss how teachers can use this in the classroom more effectively. Hopefully, Melody will be writing a guest post in the future to unpack this idea a little bit more fully, but here is one excellent classroom activity that I learned in the session.

Letters that transcend space and time!

I’ve never tried Air bnb before (https://www.airbnb.com/) but had heard other friends raving about it. After looking at the prices of hotels in Barcelona, I decided to give Air bnb a shot. I was able to get a room in a fairly central location for only $19/night. This place was only a short walk from Park Güell (Gaudi park) and a few minutes from the metro station.

Not only do you get a much cheaper accommodation than at a hotel, but you also get a host. In my case it was a young Italian architect who was happy to get me settled in and tell me about where to get any necessities nearby. Also, as an architect, she was able to give me some valuable information about the architect Antoni Gaudi, and which buildings I had to see. If you’re moving to a new location, why not try Air bnb while you try to find more permanent accommodation.

Lesson # 4 The Value of Creating a Teachers’ Coop

I’ve been an active participant in several online expat social networks over the years, and have always found them extremely useful for day to day issues such as where to get a house, where to buy certain things and even finding employment. However, speaking with Neil McMillan of SLB (servais Linguistics de Barcelona) I learned that a teachers’ coop can be much more.

SLB organizes their own training events and even creates shared materials for members to use. They also advocate for teacher’s rights in Barcelona regarding exclusionary practices and rates of pay. Their mission is to improve working conditions in their neck of the woods, something valuable for anyone in this industry.

Lesson # 5 The Difference Between Management and Leadership

Duncan Foord is the director of Teacher Training at Oxford TEFL in Barcelona and has been teaching for twenty five years. I knew Duncan a from previous encounters and was eager to attend his talk about empowering the teacher. The main point was that, quite often, teachers donâ€™t feel like they have the power to improve their workplace, and so they leave it to managers to do this. This creates a workplace full of bickering and complaining.

Duncan’s talk went on to discuss that teachers can and should be leaders both in the classroom and out of it. His focus was on differences between managing situations and acting as a leader in them. See the pictures below for a picture of Duncan explaining the dichotic qualities of each.

Lesson # 6 The Importance of Networking in TEFL

Innovate ELT16 brought together many industry professionals, not just teachers. In the course of two days, I was able to talk to regional managers, textbook promoters, other bloggers, teacher trainers, app creators and other academics in the world of linguistics. All too often, we get so tied down in the routine of our little school and local issues thatÂ we forget about the ever-growing field of TEFL.

Getting together at conferences like this is, as my new friend Claire pointed out “a chance to let loose your inner TEFL geek”. The talks were amazing, but in the end I think I learned more at the spaces of time around the conference. My advice to you, no matter your level of jet lag, is to say yes when asked to go out for a drink after a conference. Both evenings, and the next day, led to great conversations, connections and inspiration. 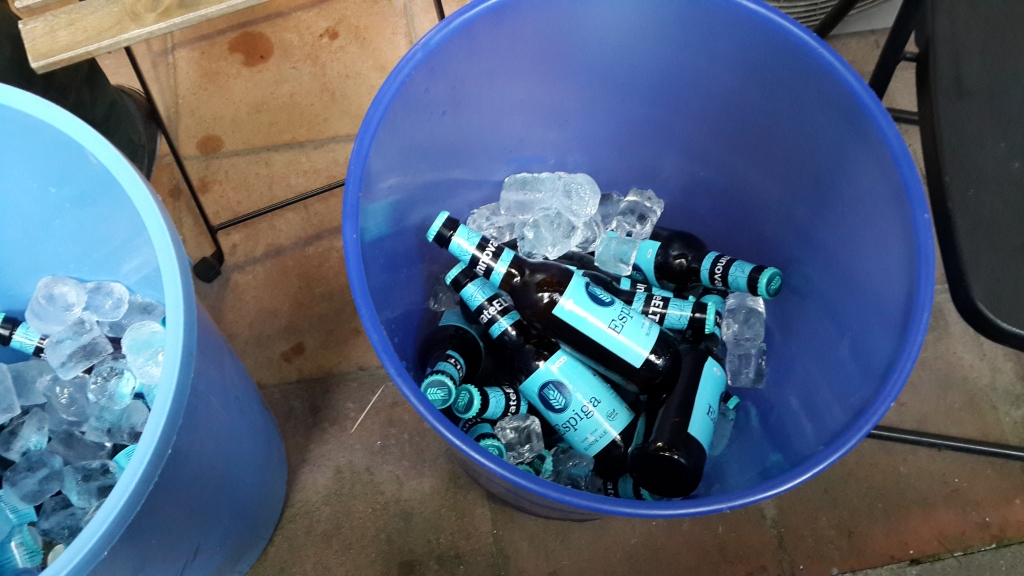 The first night of the conference, I checked in and started mulling around the Cambridge and Macmillan tables looking at new textbooks. I’ve been to a number of conferences and free workshops before that were sponsored by some of the major textbook companies. While they are often useful and a teacher will come away with some new ideas, they are usually fairly tame. As I was wandering around the front area looking at my watch for when the first talks would begin, a kind soul came up to me and pointed out that there were free drinks in the garden area.

I walked out and there was a sort of party atmosphere with vermouth drinks and Espiga beer! I am a home brewer myself and was excited by my first Catalonian microbrew. It definitely helped me socialize and meet a lot of new people that first evening. Also, when the activities began, I definitely think the group was more open to new ideas.

This Espiga experience led me later on to a craft brew hunt in Barcelona with some people who I’d met at the conference. That’s a different kind of tale, but I thought it was an interesting part of Barcelona. Apparently, the craft brew scene has popped up in the past five years or so in Barcelona, and is taking the city by storm. Sorry Estrella.

I attended two workshops that focused on technology in the classrooms. One was by Marta Cervera who works for Pearson. She shared some data that was found by researcher John Hattie in a meta-investigation of what works in English teaching. He found three major trends that work for for students: feedback, cognitive ability, and quality of teaching. Based on this, Pearsons developed “My English Lab”, a way to help teachers provide immediate feedback for students and let students keep track of their own progress.

Another tech talk I attended was by Geoff Stead. Geoff has been developing apps and other software for TEFL his whole career. He shared which trends he thought had the ability to change the industry and which would soon be forgotten. You can find links to his company and what they produce in the resource for this post.

I hadn’t really thought much about this before the conference, but Nicola Prentis’ plenary made me consider these issues. Her main points were that men tended to get promoted more quickly within companies and that a large amount of the industry powerhouses within the community still tend to be men. In fact, when a research project or new methodology is created by both a man and a woman, Nicola claimed that most recognition tends to go towards the male.

I talked to Nicola about her concerns as well as a number of other people at the conference. I don’t feel that there is enough data right now to conclusively say whether Nicola’s claims are true, but I definitely think it is something that everyone in the industry should be aware of. Nicola’s message to women in the industry is that women need to gain the confidence to apply for higher positions even if they don’t meet all the criteria; something that she claims is common for men.

Lesson # 10 It is Worth Going to Conferences

I was guardedly excited about IELT16. I’ve been in the industry for ten years and wasn’t sure if the conference would live up to its aim of being innovative. The conference exceeded every expectation that I had for it. I walked away feeling proud to be a part of the TEFL community and feeling more motivated and empowered to innovate than I have in a long time.

I strongly recommend that you check out conferences that are happening near where you are based. They are a great chance to meet like-minded professionals, keep up to date on new methodology and technology trends, develop as a teacher and take part in discussing controversial issues in the TEFL world.

As I mentioned at the beginning of this post, I will be delving further into many of the things I learned during the conference in the coming months. If you’d like to do some more research on your own, I encourage you to download the resource for this post below as it contains many links to sites, blogs and social networks that I became aware of during the conference.

< Have you considered a paid practicum in the UK or Ireland?
Motivating Teens Workshop >